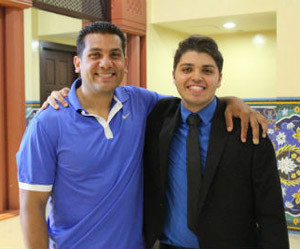 Recently, Ahmad Haidar-Ahmad—Teen Grantmaking Initiative (TGI) alumni member—saw 6 months of his hard work and determination come to a close; Ahmad was selected for the Mawby Internship with the Michigan Community Foundations Youth Project (MCFYP), a project of the Council of Michigan Foundations (CMF). His duties included planning and development of the annual Youth Grantmakers Summer Leadership Conference. CAAP recently had a chance to speak with Ahmad to learn more about his experience as a Mawby intern, the first intern with Arab ancestry to hold the position.

Ahmad’s experiences as the Mawby intern were enlightening, as he was able to expand his understanding of philanthropy and youth work, while also developing crucial professional and life skills. While working with his conference committee, Ahmad was tasked with brainstorming ideas and helping to expand programming for youth to show YAC members that there are numerous opportunities once their time with their youth philanthropy group is done. Ahmad also helped to implement a theme that focused on diversity: perspective. This theme allowed for the attending youth to view different perspectives from various communities to help them gain a better understanding of diversity.

Ahmad immensely enjoyed working with the MCFYP committee and CMF, noting that the staff was very friendly and welcoming and stating that the team had natural chemistry, which led to excellent teamwork. Additionally, Ahmad was able to gain new perspectives of his own, as he visited various communities within Michigan.

We at CAAP are extremely proud of Ahmad and wish him success in his future endeavors! To read about more Arabs giving back to their communities, visit our blog!