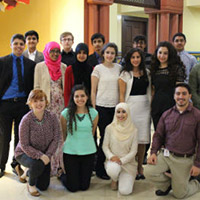 On June 3, the Teen Grantmaking Initiative (TGI), a project of the Center for Arab American Philanthropy (CAAP) held its inaugural Year End Celebration to recognize and celebrate the accomplishments of the past year.

TGI is a youth philanthropy group dedicated to bettering their community through grantmaking. Formed in the fall of 2011 in Dearborn, MI, TGI has seen much success over the course of the program. Since its inception, TGI-Dearborn has granted $20,000 to organizations serving the greater Detroit area.

Check out pictures from the celebration here!
Thank you to all the TGI members, grantees, and partners for an amazing TGI
year!