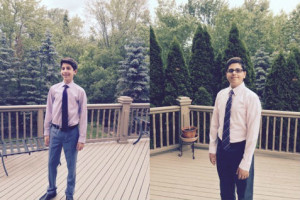 On February 28, CAAP will host the very first Piano Keys for Syrian Kids, a piano concert to raise funds and awareness about the plight of Syrian refugees. High school students Omar and Ziad Fehmi had the idea to host a concert with their friends when they learned about the current struggles of Syrian refugee children. CAAP recently asked the brothers about their inspiration and motivation behind the event.

CAAP: What was your inspiration to host Piano Keys for Syrian Kids?

ZIAD FEHMI: My inspiration to host Piano Keys for Syrian Kids started when I was visiting a friend where I met someone who went to one of these refugee camps. He described to me the terrible living conditions and many problems these children had. I felt like I needed to do something to help these children.

OMAR FEHMI: I have been playing piano for about 8 years now and I enjoy playing. Before the conflict, Syrian children were just like us in terms of opportunities and a steady future. When violence broke out these kids had their opportunities taken away from them and future put on hold. My inspiration or reason for hosting Piano Keys for Syrian Kids is not only to send funds to benefit kids who are like me but also to raise awareness that these kids are not in the position they are in due to their mistakes.

CAAP: Why did you choose to support UNICEF and Syrian refugee children?

ZF: We chose to support Syrian refugee children because no child ever should have to go through the atrocities that these children, many of whom not even 10 years old, are going through everyday.  We decided to go through UNICEF because they are a credible organization, this way everyone will know that the money will get to the people who need it the most.

OF: Although we will never truly be able to understand the position that Syrian children have been put in, our goal in supporting Syrian children is to give them back the lives they once had. We want them to have the same opportunities that we have. Children who are without parents, without a guardian cannot support themselves; our goal is to be able to aid these children who have no one supporting them.

CAAP: Do you have advice for high school students about giving back? Specifically – how can students use their talents to make a difference?

ZF: If a high school student wants to give back to their community, they should talk to people around them about their passion and share idea of giving back, this way a small thought can be put to action, evolve and become bigger and bigger, the more people that know the better! Students can tailor fundraising to their talent or interest as long as this makes a difference; for example, if they are really good at sports, they can hold a competition that requires an entrance fee which will go to the cause. The possibilities are endless, as long as the student is willing to use their imagination, the important part is to get started and do some good!

OF: Yes! In the grand scheme of things even the smallest act can make a difference.

Come see Omar, Ziad, and their friends play a very special concert this month – tickets are on sale now!