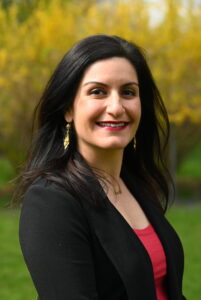 The Center for Arab American Philanthropy (CAAP)—an institution of ACCESS—announced, today, the appointment of Tamara El-Khoury as its new director, following a year-long national search. El-Khoury takes over the role that was formally assumed by CAAP’s founder and previous director, Maha Freij, who is currently ACCESS President and CEO.

El-Khoury brings 20 years of experience in fundraising, development, and storytelling from roles with various institutions that focus on the needs of underserved communities, particularly children and low-income families. In her most recent role as Director of Development at St. Vincent Catholic Charities (STVCC) in Lansing, Michigan, El-Khoury led several successful initiatives to help amplify the nonprofit’s fundraising efforts. In 2020, during the pandemic, she helped raise 118% of STVCC’s revenue goal, while working remotely.

“I am honored to accept this appointment as director of the nation’s only Arab American community foundation,” says El-Khoury, “In my new role, I hope to contribute to and empower a national community of Arab Americans – of all backgrounds – to practice their philanthropy in the most thoughtful, strategic way.”

For El-Khoury, a main goal as Director of CAAP will involve redefining and reshaping what it means to be a philanthropist. She wants to help make giving more accessible. “When people think about philanthropy, many feel it is out of reach for them – they think of philanthropists as those who grace the cover of magazines, like Forbes. I want to help others understand how their philanthropy can make a difference,” says El-Khoury.

As the daughter of esteemed Lebanese journalist Charbel El-Khoury, El-Khoury has always had a deep love for storytelling, which she has woven into her fundraising efforts to better help connect donors to giving opportunities. In her previous position at Community Home Trust, an affordable housing nonprofit in North Carolina, she was able to double the number of donors in the span of one fiscal year by implementing various marketing strategies, which included a redesign of the organization’s website and communications materials.

Since its inception, CAAP Founder and past Director Maha Freij has served as the institution’s primary executive leader. This most recent appointment makes El-Khoury only the second director in CAAP’s 12-year history. “To follow the footsteps of such a visionary leader, like Maha, is truly an honor. As an Arab American woman, I find inspiration in Maha’s leadership and am ready to soak up all her knowledge and guidance, and take CAAP to the next level,” says El-Khoury.

As the visionary behind CAAP, Freij sought a successor that could understand and appreciate the power and influence behind the now well-established community foundation and, also, its potential, “Tamara beautifully merges so many critical skills, including relationship-cultivation and storytelling. Her multi-faceted background solidifies my conviction in her ability to continue to grow CAAP and expand the reach of this nationally recognized institution,” says Freij, “While it is bittersweet, for me, to officially shed my role as the head of CAAP, I trust we are in very capable hands.”

El-Khoury is a first-generation Lebanese American who grew up in the Washington D.C. area She currently resides in East Lansing, Michigan with her 5-year-old son and 7-year-old daughter. She enjoys playing soccer, traveling, and exploring her community with her children in her free time.