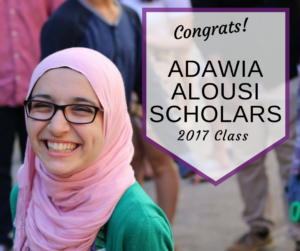 Women in STEM (Science, Technology, Engineering and Math) are vastly underrepresented – indeed, a rarity. However, CAAP is aiming to turn the tide through the Dr. Adawia Alousi STEM Scholarship Fund for Muslim Women. This scholarship program, the first of its kind, will establish a sorority of Muslim American women pursuing STEM: the Adawia Alousi Scholars.

The fund and the sorority are named for Dr. Adawia Alousi, who was a true renaissance woman: a scientist and educator with a multitude of passions. Originally from Iraq, the discoveries and scientific contributions of this pioneering researcher continue to improve and extend lives and her work has been the benchmark for pharmacological experimentation around the world. Dr. Alousi was truly a leader in an era when very few women were recognized for their accomplishments, let alone a foreign-born Arab woman.

Established at the Center for Arab American Philanthropy (CAAP) by the family of the late researcher, this endowed fund supports Muslim American women to obtain education within STEM fields – placing highest priority on immigrants and refugees.

CAAP is thrilled to be leading the charge to support Muslim American women in STEM through this truly unique initiative. We are committed to not only provide financial support through the Fund, but also create mentorship and networking opportunities for years to come.

Being recognized as a recipient of the Adawia scholarship truly means a lot to me because it reminds me that I have a support system of Muslim women in the STEM field that believe in my capabilities and are constantly encouraging me to be curious, passionate, and to leave my mark.
– Zahra Shafiekhorassani, 2017 Adawia Alousi Scholar

We are confident that all of the young women who have received the scholarship will continue to excel, not only in their educational pursuits, but as they go on to become first-class doctors, researchers, and engineers. And now, without further ado, we are incredibly proud to introduce the very first class of Adawia Alousi Scholars! Congrats to all of this year’s scholarship recipients!