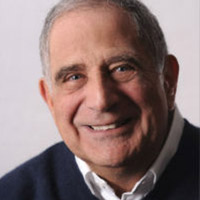 When it comes to Arabs and the media, Dr. Jack Shaheen is a household name. Prompted by the negative stereotypes present in television programs and films, Dr. Shaheen has devoted his time and work to changing perceptions of Arabs in mass media. He began his extensive research in the early 90’s, documenting and examining the many existing stereotypes and publishing numerous works, culminating in his signature book Reel Bad Arabs: How Hollywood Vilifies a People in 2001.

Dr. Shaheen confronts those responsible for the negative portrayals of Arabs, offering to consult with filmmakers to avoid harmful stereotypes and provide accuracy and truthfulness instead. His ultimate goal is to help create a space free from stereotypes. To achieve this goal, Dr. Shaheen, along with his wife Bernice, encourages young Arab Americans to improve the media by entering the field themselves. To further this goal, the Shaheens established the Jack G. and Bernice M. Shaheen Endowed Media Scholarship Fund at the Center for Arab American Philanthropy (CAAP). Through this fund, the Shaheens support Arab Americans studying journalism, television, radio, and film.

This scholarship helps to motivate college students to pursue a career in media and combat negative stereotypes surrounding Arabs. Dozens of media professionals have benefitted from the Shaheen’s generosity, including NPR’s Leila Fadel and filmmaker Annemarie Jacir.

Dr. Shaheen will be honored this year as “Arab American of the Year” at the ACCESS 44th Annual Dinner in Detroit, Mich. Congrats, Dr. Shaheen – and thank you for all you do to shape perceptions about our community!

To read about more Arab Americans Who Care, read our blog series here!

One comment on “Jack Shaheen: A reel good Arab”